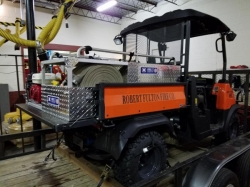 The Robert Fulton Fire Company along with units from Union Fire Company, Community Fire Company of Rising Sun, Water Witch Fire Company, Quarryville Fire Company, and an ambulance from Wakefield EMS were dispatched for a possible barn on fire at 189 Soapstone Hill Road in Fulton Township. Engine 5-13-1 with Assistant Chief Chris Hodgden and a full crew, responded and was advised by Lancaster County-Wide Communications that the caller stated his barn was on fire. The caller also advised 911 that he had approximately 30 cows in the barn.

Engine 5-13-1 arrived on scene moments later and confirmed a 100’ X 60’ barn with smoke showing from the roof and walls and requested a second alarm be dispatched. This brought units from Rawlinsville Volunteer Fire Company, Refton Community Fire Company, and tankers from West Willow Fire Company and Level Fire Company out of Harford County MD. A medic unit out of Water Witch Fire Company was also dispatched to standby on the scene.
Engine 5-13-1 positioned itself between the small barn and the milk house, the crew pulled the 2 200 foot 1 ¾ inch preconnected attack lines, one to protect the milk house and the other to protect the small barn. The second half of the crew pulled the 2 ½ inch blitzfire and arranged it on side "A" along with the prepipped deck gun, cooling down the bulk of the fire momentarily. Tanker 5-13 (FF Tomlinson W/2) arrived on scene and supplied Engine 5-13-1 with 3000 gallons of water, while Engine 5-13-3 (Lt. Stoltzfus W/5) and Engine 5-13-2 (FF Childress W/2) setup on side "B" and pulled numerous handlines in an effort to protect the silos and the back half of the milking parlor.
As the wave of assist units began to arrive on scene they were given numerous assignments. Cecil Engine 73 (Water Witch F.C.) was instructed to set up a draft site to fill tankers at the creek on Goat Hill Road. Engine 5-9-1 (Refton Comm. F.C.) was to set up and supply Engine 5-13-3 and Truck 5-7 (Quarryville F.C.) at a local farm pond at the intersections of Soapstone Hill Road and Little Britain Church Road. Chester Engines 21-4 and 21-2 (Union F.C.)set up at the creek on Soapstone Hill Road and supplied Engine 5-13-1. The remainder of the apparatus on scene was used for manpower and tools.
At this time no damage estimates are figured but fire fighters were able to save the milk house, most of the milking parlor, three silos and their contents, as well as a two story heifer barn located 20 feet from the barn.
As the fire was being placed under control, a trackhoe was called in from Risk Excavating to assist in removing the heavy timbers and large stacks of hay. By using this large piece of equipment on scene, we are able to extinguishing all remaining hot spots.
All units cleared the scene at 11:00 PM but still had a good hour of cleanup to get the equipment ready and available for the next call.
A special thank you goes out to Quarryville Fire Company Engine 5-7-2 and to West Willow Tanker 5-11 for the standby and helping get our units cleaned up and ready. 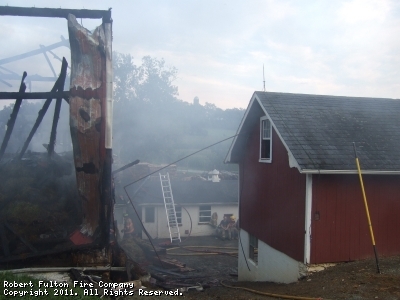 Fire fighters were able to save the milk house and this smaller barn. 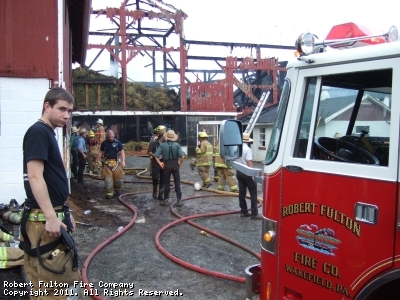 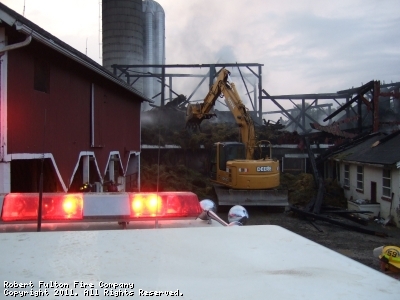 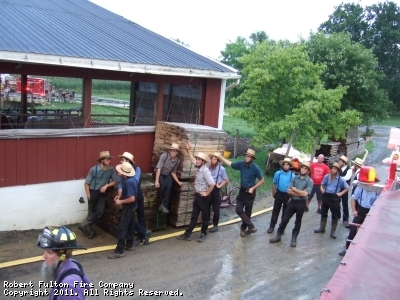 Family and neighbors waiting to start the clean-up process. 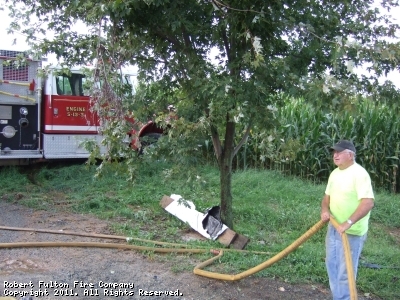 Life Member/Engineer Crockett Halsey arranging a handline off of Engine 5-13-3. 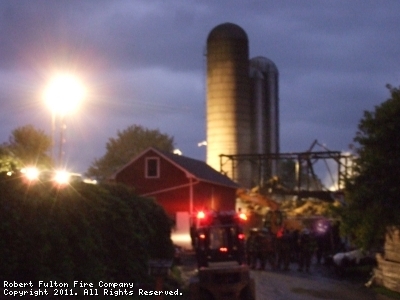 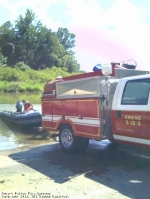 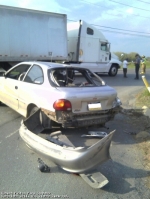 This site has been viewed 715,486 times.
Calls
News
Events
Apparatus
Maintained by the members and staff of Robert Fulton Fire Company. Designated trademarks and brands are the property of their respective owners. Copyright © 2006-2022. YourFirstDue Inc. All Rights Reserved. Content on this web site is supplied by Robert Fulton Fire Company. YourFirstDue Inc. cannot be held responsible or liable for any content, text, pictures, or any other media found on this web site.
Management login
Powered by